CAUSE OF CANONIZATION OF BLESSED MARIE RIVIER 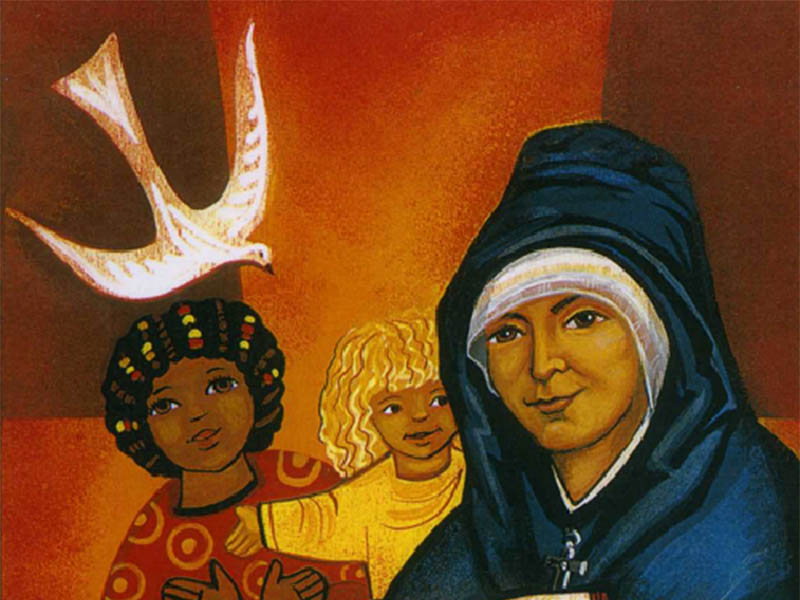 CAUSE OF CANONIZATION OF BLESSED MARIE RIVIER

Prayer of  THANKSGIVING for the  Canonization of  BLESSED MARIE RIVIER

Pope Francis on Monday received in audience Cardinal Marcello Semeraro, Prefect of the Vatican Congregation for the Causes of Saints, and authorized him to promulgate 6 decrees regarding 2 miracles and 4 heroic virtues.

“One of the miracles is through the intercession of Blessed Marie Rivier of France, who will be declared a saint. ” says in the Vatican News daily bulletin. We received this news with gladness and joy! Words cannot contain the JOY that burst in our hearts! 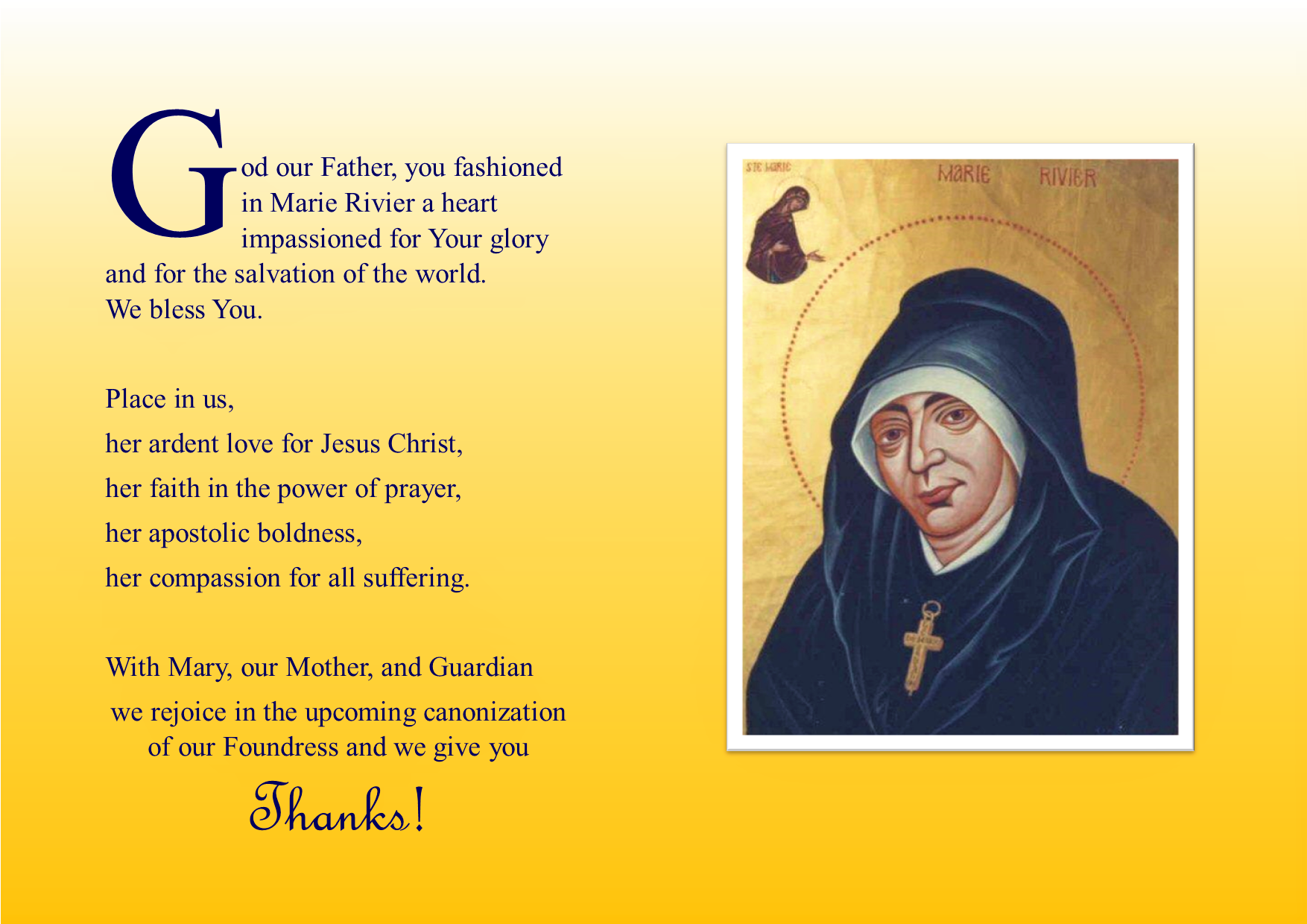 The Chronology of the Process of the Canonization

The Opening of the Diocesan process begun by Bishop Guibert. The writings of the Servant of God are given to him.

This is the stage of the information inquiry on her reputation for holiness and miracles.

There were 42 witnesses including M. Vernet and 15 sisters with a recording of the testimonies given under oath.

The body of Marie Rivier was exhumed in the presence of Bishop Hippolyte Guibert (Bishop of Viviers) and Msgr. Dabert, Vicar General.

On this day, the first recognition of the remains of the foundress took place.

On the door that closes the tomb which contains her exhumed body, was engraved:

Here lies our Mother Marie Rivier, Foundress and First Superior of the Congregation of the Presentation of Mary, born in Montpezat, December 19, 1768, died in Bourg Saint Andéol, February 3, 1838. De Profundis.

The various procedures were sent to Rome, supported by letters from 25 bishops, and forwarded to Pope Pius IX. On May 12, 1853, Pope Pius IX declared Marie Rivier Venerable, whom he is pleased to call the ‘Woman Apostle’.

Pope Pius IX received the letters from the Bishops requesting the beatification of the Servant of God, Marie Rivier: “It is a beautiful life,” said the Supreme Pontiff, “a beautiful life that of the Venerable Mother Rivier, a marvelous life of zeal. On May 19, His Holiness developed the same sentiments in his letter to the Bishop of Viviers :

“ The foundation of the Institute of the Presentation of Mary, its development and its works attest well to the charity and zeal of this venerable Virgin who, towards the end of the last century, when our holy religion and its ministers were violently persecuted, undertook with virile courage, with no other support than trust in God, to sow the Catholic faith in the hearts of children, to revive it in the young girls and women assembled and exhorted by her, to spread it at last, not only in the people among whom she lived, but also in every place with the help of a new congregation, which she formed at a time when religious communities were severely proscribed…”.

From the year 1870, the voluminous process relating to virtues and miracles was translated and printed. Pope Pius IX, by his decree of December 22, 1870, authorized the Sacred Congregation of Rites to begin without delay the investigation into the heroicity of the virtues of Mother Rivier.

On November 17, 1873, Pius IX, writing to the Bishop of Viviers, witnessed to his desire to hasten the success of the cause of this Venerable Virgin, who was animated by the spirit of God, while all orders in France were troubled and overthrown, the priests persecuted, exiled, and led to torments, devoted her efforts, with astonishing perseverance and courage, to defend our holy religion, to procure the salvation of souls, and left us as a legacy of her zeal, the excellent and numerous family of the Presentation of Mary. We must, therefore”, adds the Supreme Pontiff, “ask God to turn away anything that might stop or delay the progress of this cause and be willing to bring about its prompt and happy outcome. »

On June 15, 1890, Pope Leo XIII pronounced the Decree of the heroicity of the virtues.

The miracle is still lacking.  The process would be long; the First and Second World Wars would slow down the progress of the cause… and the wait for a miracle.

Because of political difficulties (1902-1905), the teaching congregations were threatened with suppression. In 1903, Mother Saint Seraphine, Superior General, with the consent of her Council, asked from The Sacred Congregation of Rites, through the intermediary of the postulator, the authorization to place the remains of the Foundress in security. The authorization was granted with the order of procedures to be followed. The Bishop of Viviers received the authorization on June 8, 1903.

All legal formalities being observed for the opening of the tomb, the remains of Marie Rivier were placed into three security boxes. These boxes were placed in well-sealed containers and were entrusted to several trusted and well-known families of the Sisters, within and outside France.

Paulette was born on August 3, 1930, in Bourg Saint Andéol, Ardèche (Diocese of Viviers).

Since December 1937, the child’s state of health had been deteriorating: The doctor has diagnosed an infantile acrodynia. The psycho-neuropathic and acroatological symptoms are there, fully present in the sick child. They are impressive, as was her sadness and anxiety as well as the pallor of her face.

Knowing their child’s illness, the parents asked their families and the sisters of Bourg St. Andéol to pray to Marie Rivier, their Foundress. They themselves, their families, the sisters, and the students began a novena of prayer to the venerable Mother Rivier. They were preparing to celebrate the centennial anniversary of her death.

The child was completely healed on the last day of the novena. On the evening of February 3, 1938, all signs of the illness disappeared instantly. No more physical and psychological traces of the illness. The child went from a serious condition to complete healing without any intervening recovery period. Several medical visits followed, and the child was found in excellent condition.

The healing is retained and the miracle is studied. In December 1975, a commission of nine doctors met one last time and recognized Paulette Dubois’ healing as miraculous. But the dossier continued to drag on, and it took the dynamism and efficiency of Cardinal Palazzini, Prefect of the Causes of Saints, to reawaken the process.

After having received all the authorizations, the trunk containing the boxes was opened in the presence of the authorities of the Diocese and the Congregation. The community was allowed to be present in absolute silence.

Each box was opened and contained a descriptive list of the contents. The doctor noted that the contents in each box were complete.

Celebration of the Beatification of Blessed Marie Rivier in the St. Peter’s Square, Rome.

The remains were placed in a reliquary, which is under the altar in the main chapel of the Mother House in Bourg St-Andèol, France.

Where are we today?

Pope Francis had approved the Cause of the Canonization of Blessed Marie Rivier. He authorized Cardinal Marcelo Semeraro, Prefect of the Vatican Congregation for the Causes of Saints, on December 13, 2021.